About the author
Home » Amrita: the fount of nectar-delight

Amrita: the fount of nectar-delight

The Creator in His dreaming has created     this immortal thing in creation, Figuring as a common creature,     forgetful of his Self: A mystic reason makes Him hide     His own form and nature, Ever at labour in working out     the Impossible: To transfigure Nature, to establish the Transcendent here on the bosom of     material Earth, To feed the divine sacrificial Fire     with this human body, With this bounded frame. Lo, the timeless hero-worker     with his flaming faith, Indifferent to the rude impacts of Reality, Dreaming the victorious Mother's     wonder-dreams, Shaping in his heart of hearts     the golden garden of Paradise — A faultless, sleepless, pure     self-dedication Has built this life into a piece of     IMMORTALITY.

"True humour springs not more from the head than from the heart. It is not contempt; its essence is love. It issues not in laughter, but in still smiles which lie far deeper.   — Thomas Carlyle"

Motakaka: Amrita-da, how is it that you have never scolded me? Nolini-da has scolded me several times. What is your reason for not scolding me?

Amrita: The reason is very simple. Will you believe me if I tell you?

Motakaka: Certainly. By all means.

Amrita: It is because I am wanting in capacity, competence and authority.

Amrita: Satinath, tomorrow the results of Kumuda's examination will be out. She is very nervous.

Satinath: Naturally she will be nervous. In the old days Sri Aurobindo was there to remove all your anxieties. But who is there for her now?

Priti: Amrita-da, how strange that both you and Nolini-da are suffering from a severe cold.

Amrita: Yes. Alas, I can compete with or equal Nolini only in this respect. Perhaps this time I am the winner.

Priti: I am sorry, but here also Nolini-da has won.

Amrita: How and why?

Priti: You have only a cold, but he has a cold and a cough as well.

Amrita: Since I have lost in this competition also, I have no hope of defeating Nolini in anything in this life.

Motakaka: Amrita-da, I am happy to tell you that the colour of your ink is exactly the same as mine.

Amrita: That is no surprise, for our minds are also filled with the same ink.

Motakaka: Wonderful! I wish to tell you that I do not want to have even one more drop of ink in my mind than you have in yours. In that case, Mother will grant me liberation without fail.

Amrita: Liberation? In my philosophy liberation is an escape. That is deception. After staying at the Ashram for so long, do you want to deceive the Mother? For God's sake, do not deceive her!

Old Long Since, Parichand's translation of Amrita's reminiscences in Tamil, was corrected by Nolini-da. Nolini-da sent the corrections to Amrita through Chinmoy and wanted to know if Amrita was satisfied with his corrections.

Amrita: Who else should be the judge of Nolini's English, if not I?

Chinmoy: It is not a matter of English. He wants to know if your ideas are properly conveyed after the necessary corrections have been made.

Amrita: Nolini understands my ideas far, far better than I myself do. Go and tell him that I am not competent to correct his English, but I do have the audacity to correct his Bengali.

Sisir sent Arati to Amrita with the book, English — How to Write It. Since Amrita was out for lunch, she left the book with Chinmoy. When Amrita returned to his desk, Chinmoy gave it to him, saying that Arati had left it.

Amrita: Have you read the book?

Chinmoy: Quite a few years ago I read it. Unfortunately, I cannot appreciate it.

The following day Amrita returned the book to Chinmoy with this remark:

"I found nothing striking in the book. Go and return it to Sisir."
Chinmoy: Did you ever care to read W. McMordie's English Idioms or A.C. Dey's Hidden Treasure?

Amrita: McMordie's English Idioms I do not remember ever reading, but Hidden Treasure I saw once in Nirod's hands. It was simply impossible for me to find the treasure, however, for it was too deeply hidden. In any case, return this book, and bring the two books you mentioned from Sisir.

Sisir: We do not have Hidden Treasure, but I appreciate the book. In my time, also, the book was in great demand. Suniti, please see if McMordie's English Idioms is in the Library.

Suniti looked for the book, but could not find it. On hearing that neither of the books were available at the Centre of Education, Amrita, with a broad smile, said:

Laljibhai handed a large envelope to Amrita for the Mother.

Amrita: Ah, it is a fine envelope. So big!

Laljibhai: As it is for the Mother, it must be sent properly.

Amrita: When it comes back from the Mother, it is to be kept sacredly.

Amrita: So you see, how bright my future, how bright! Unfortunately, nobody cares to know the poetic genius in me.

A well-known member of the Ashram handed a letter to Amrita for the Mother, requesting him to read the letter. Amrita went upstairs and read the letter to the Mother. When he brought it back, he asked Rose to put the letter inside an envelope and seal it. A few hours later, when the sadhak came back to Amrita to learn about the letter, Amrita gave him the envelope and said:
"Who says it is a letter? You must teach me English."
[At that time Nolini happened to enter Amrita's room.]

Nolini: What else can he do? Why do you forget that this is his nature?

Amrita: I must say that it is not my nature, but my poor fate.

Rajen-da brought a serious complaint against one of the Ashramites to Amrita.

Amrita: Rajen, it seems to me that the transformation of nature is a little difficult. Otherwise, by this time my nature would have been totally transformed.

Ananta Chaitanya: Dear Amrita, you are always cross with me. If you had been born in America and I at Pondicherry…

Amrita: Go on. Why do you stop?

Ananta: Spirituality is not as cheap in America as here. You must realise that it is very difficult for me to stay here, and at least you must say that, of late, I have made much progress.

Amrita: Who says that you have not? And I say, just because Ananta the Great was born in America, one day she will become more spiritual than Pondicherry.

Amal Kiran arrived in Amrita's office carrying the sixth volume of Amrita's Old Long Since. In a little while, Amal asked Chinmoy to hand him the dictionary.

Amrita: Amal, you, too, need a dictionary!

Chinmoy: Not in the least. He is a walking dictionary.

Amal: Amrita, I am not a walking dictionary, but a limping dictionary. As I need a cane to move about, so do I need an Oxford or a Cambridge for my mental support.

Amrita: Then the limping dictionary certainly needs only a pocket dictionary.

Nolini: Amrita, I have been to Pranab's place for a medical check-up. Dr. Vyas says that I have improved in every way. Even my chest has increased!

Amrita: That is fine. Wonderful, wonderful!

Nolini: But you know, for a long time I have not been able to increase one thing.

Amrita: What is that?

Nolini: My height. No improvement.

Amrita: I know a good cure for it.

Nolini: A cure to increase my height?

Amrita: Chinmoy, I am dying of thirst. You know my name is Amrita, which means nectar. Since I am not fortunate enough to drink amrita, I have to depend on your water.

Chinmoy: I am sure, Amrita-da, you have drunk amrita quite a few times during your meditation.

Amrita: You are mistaken. Amrita is meant for the cosmic gods, and not for this mortal.

Our Amrita is he who covers the scars Of other souls even from their own sight. He comes to us all veiled under varied forms. In every guise his is a unique light. Him we adore because his snow-white heart Believes in his Ideal true, its endless range. No sacrifice to him is ever too great In the cause of creation's fire-pure change. A million seekers may sit at their Master's Feet. But Amrita's life makes Him a reality. Compassion-Sun belongs to the Master alone. A flame, this soulful child, through Eternity. This kingly soul is far above the law, Yet obeys the law to be at our hearts' doors. Reality and Unity — his boat Plies quick between these two supernal shores. Delight shoots through his life because he knows How to do good to others at each hush-gap. His loving heart feeds not the dark despair. He expects nothing save the Mother's Lap. September 19, 1964 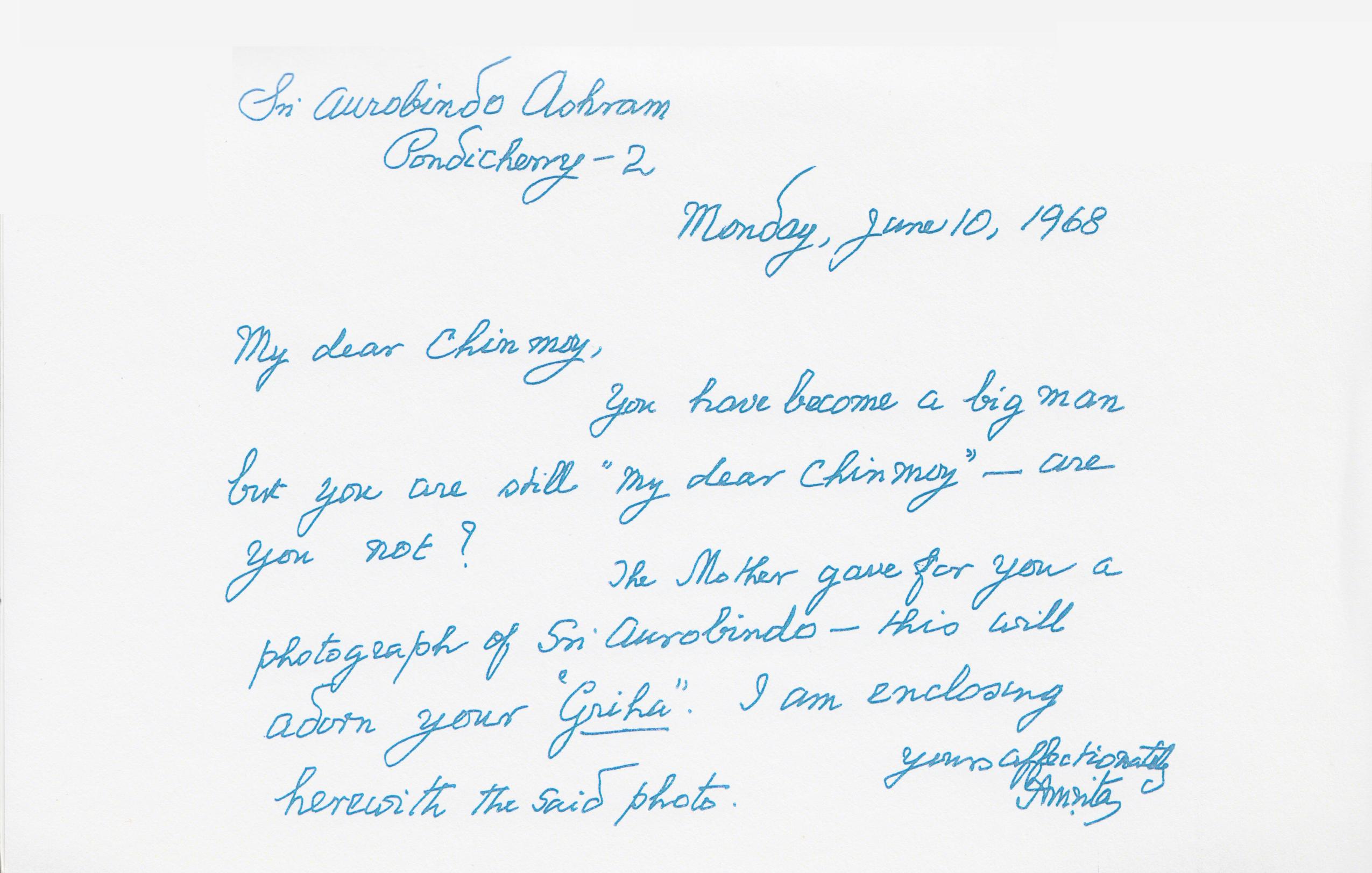 You have become a big man but you are still “My dear Chinmoy” - are you not?

The Mother gave for you a photograph of Sri Aurobindo - this will adorn your “Grihas”. I am enclosing herewith the said photo.

Written in the Sri Aurobindo Ashram in 1962-63 but published in the West.
This book can be cited using cite-key afn