On Wednesday, 26 May, Sri Chinmoy was given an award by the New York City Bicentennial Commission in appreciation of his many inspirational offerings on behalf of America's Bicentennial. Following are the words spoken by Mr. Bob Richardson and Sri Chinmoy during the brief ceremony on the steps of City Hall. 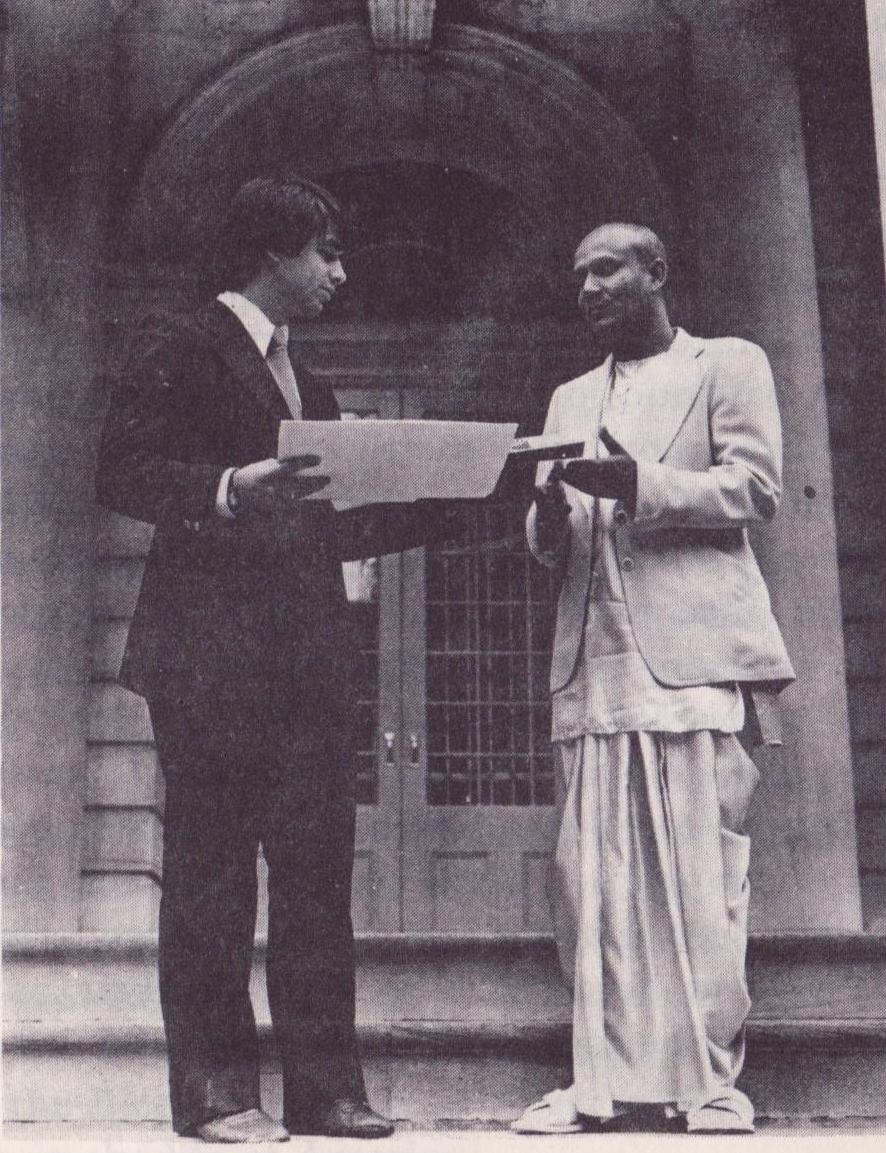 Mr. Bob Richardson: Good afternoon, ladies and gentlemen. Today we are here to pay bicentennial tribute to the Sacred Fire. The Sacred Fire is a group of spiritually concerned Americans inspired by the teachings of Sri Chinmoy. Sri Chinmoy is a person who has deep and abiding love for America. He is spiritual Director of the United Nations Meditation Group. He also is the author of several books on America, and spiritual teacher to hundreds in the New York metropolitan area.

In an effort to rekindle those human ideals and spiritual values so dear to our founding fathers, the Sacred Fire group has planned and organised more than twenty-five separate Bicentennial programmes, including writing, staging and performing patriotic plays, musicals, dramas and dances throughout the metropolitan New York area, publication of a book which includes responses by many American political figures on what the Bicentennial means to them, participation in many Bicentennial street fairs and festivals, and a 360-mile relay run from New York through Philadelphia to Washington, D.C., carrying a lighted torch symbolising the rekindling of the American spirit. In addition, the Sacred Fire group has been given a letter of commendation from President Ford in recognition of their outstanding contributions made to the Bicentennial.

At this time I would like to present to the Sacred Fire and Sri Chinmoy the Bicentennial Certificate of Participation. (Mr. Richardson read out the certificate, which is reproduced on the facing page.)

Sri Chinmoy: I am extremely grateful to the New York Bicentennial Commission. With your kind permission I wish to ask some of the members of the Sacred Fire to sing a song which we have dedicated to the soul of America in connection with the Bicentennial. (Disciples present sang “0 My America”.) This song embodies the dedication of the Sacred Fire, and this dedication we offer to our beloved America and to the soul of America for constant guidance.

The Bicentennial is not a mere incident, not a mere date in the calendar of world history. It is a blessing supreme which is guiding not only the length and breadth of America but also the length and breadth of the entire world. America’s independence 200 years ago was not only America’s independence; it was the independence of all of humanity that longed for liberation, illumination and perfection. And now, 200 years later, America is growing with redoubled assurance and confidence. This confidence we feel and see in the heart of the Bicentennial, and this assurance we feel and see in the life of America.