On the evening of 16 October 1998, Sri Chinmoy dedicated a Peace Concert in Queens, New York, to South Africa’s President Nelson Mandela. The guest of honour was Mr. Jacob Zuma, Deputy President of the African National Congress and Minister of Economic Affairs and Tourism for KwaZulu-Natal, South Africa.

During the concert, Sri Chinmoy played his meditative compositions on a variety of instruments from around the world, and his students performed Sri Chinmoy’s songs dedicated to President Mandela and First Lady Graça Machel. The words to these songs appear at the back of this hook.

Sri Chinmoy also read the prayerful message he gave during a soulful pilgrimage to Robben Island in December 1995 to visit the cell where President Mandela had been incarcerated for many years. At the end of the programme, Sri Chinmoy lovingly offered Comrade Zuma a special honour entitled “The Nelson Mandela Award.”

Following are Sri Chinmoy’s dedication to President Mandela, his remarks while presenting the award to Comrade Zuma, and Comrade Zuma’s acceptance speech.

During the Peace Concert, Sri Chinmoy holds a large, framed photograph of President Mandela and offers the following dedication: 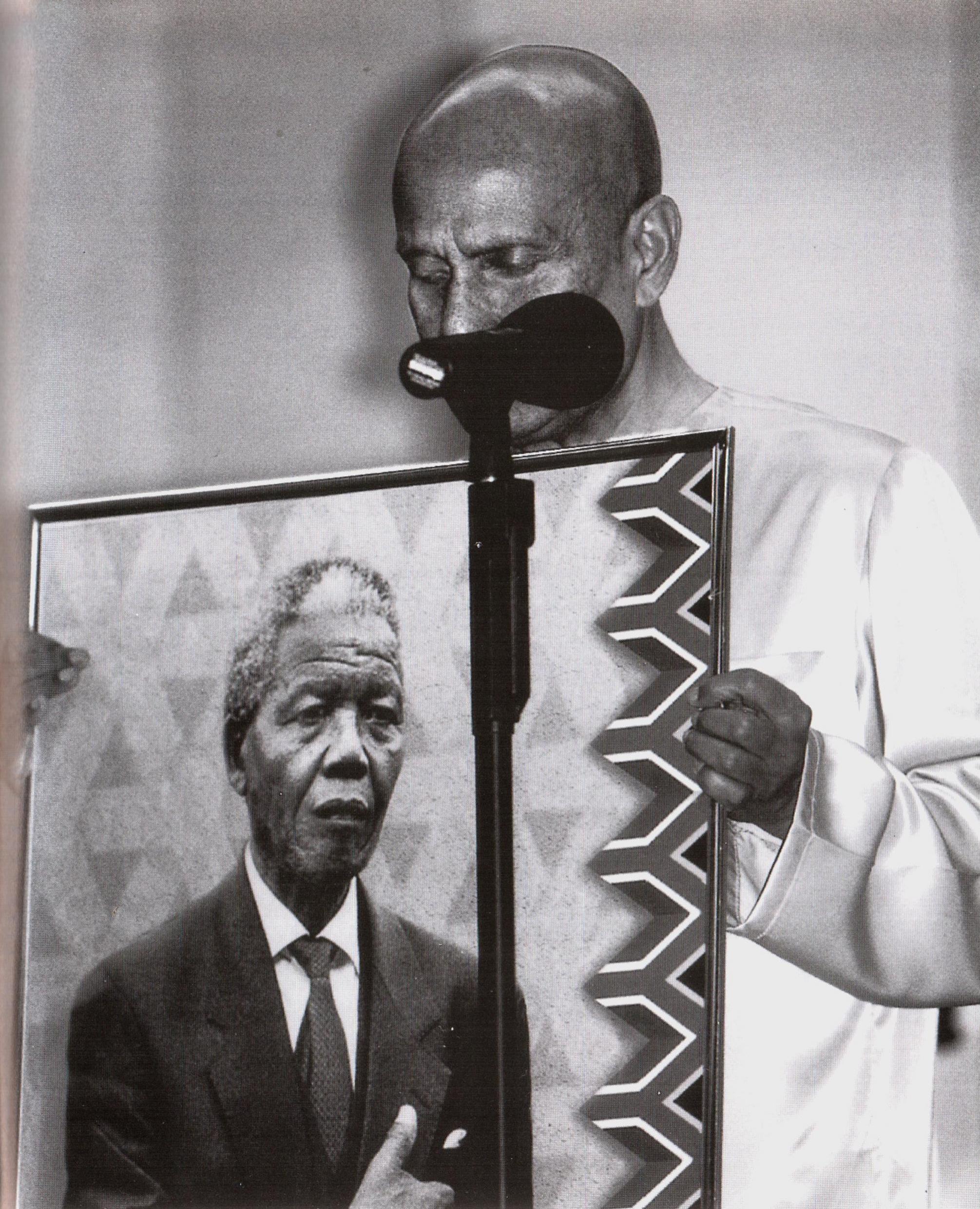 May our Absolute Lord Beloved Supreme shower His choicest Blessings upon His choicest instrument to reveal and manifest a universal brotherhood. My Brother, our Brother, humanity’s Brother, President Mandela, to your sleepless and breathless self-giving life for the improvement and betterment of humanity, I bow and I bow and I bow. 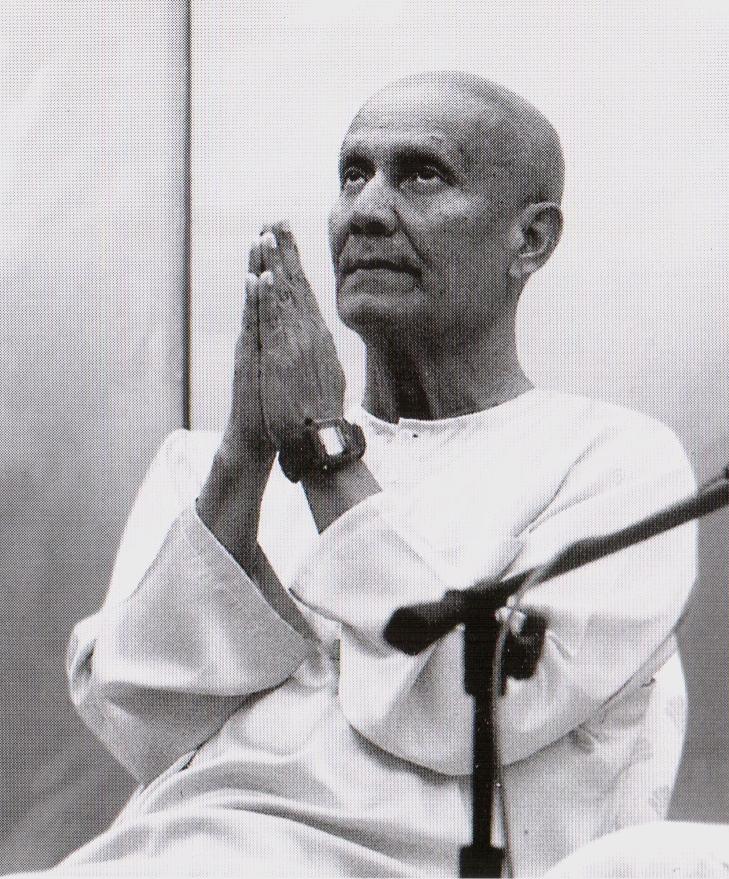 Sri Chinmoy opens the Peace Concert with a silent meditation. 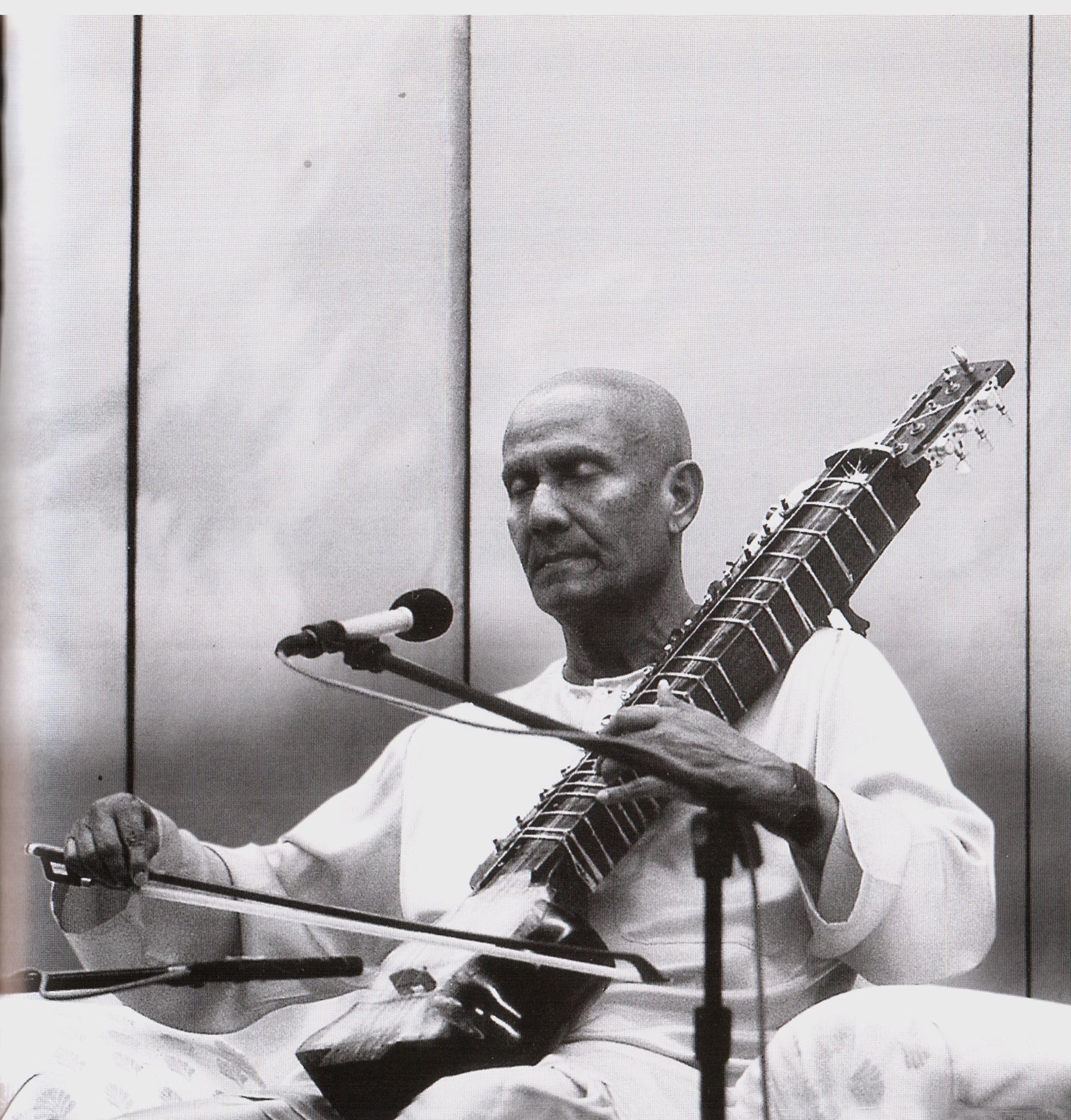 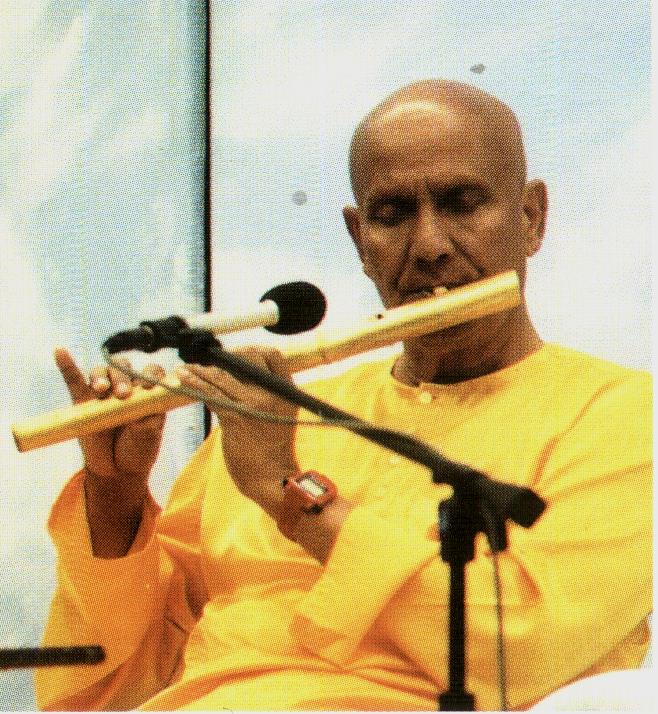 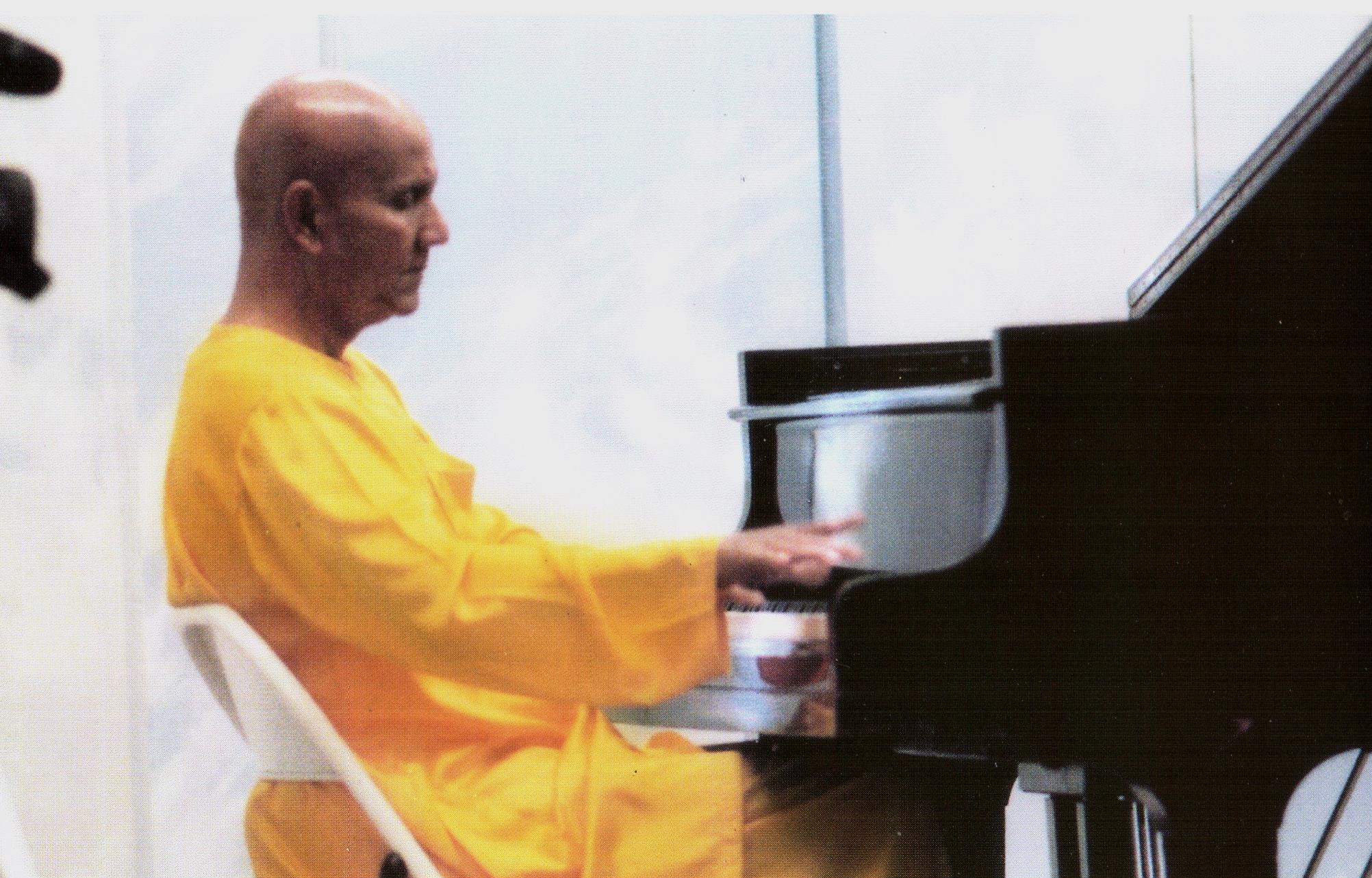 The guest of honour is Comrade Jacob Zuma.

During the concert Sri Chinmoy plays the Indian flute, the viola and the piano. 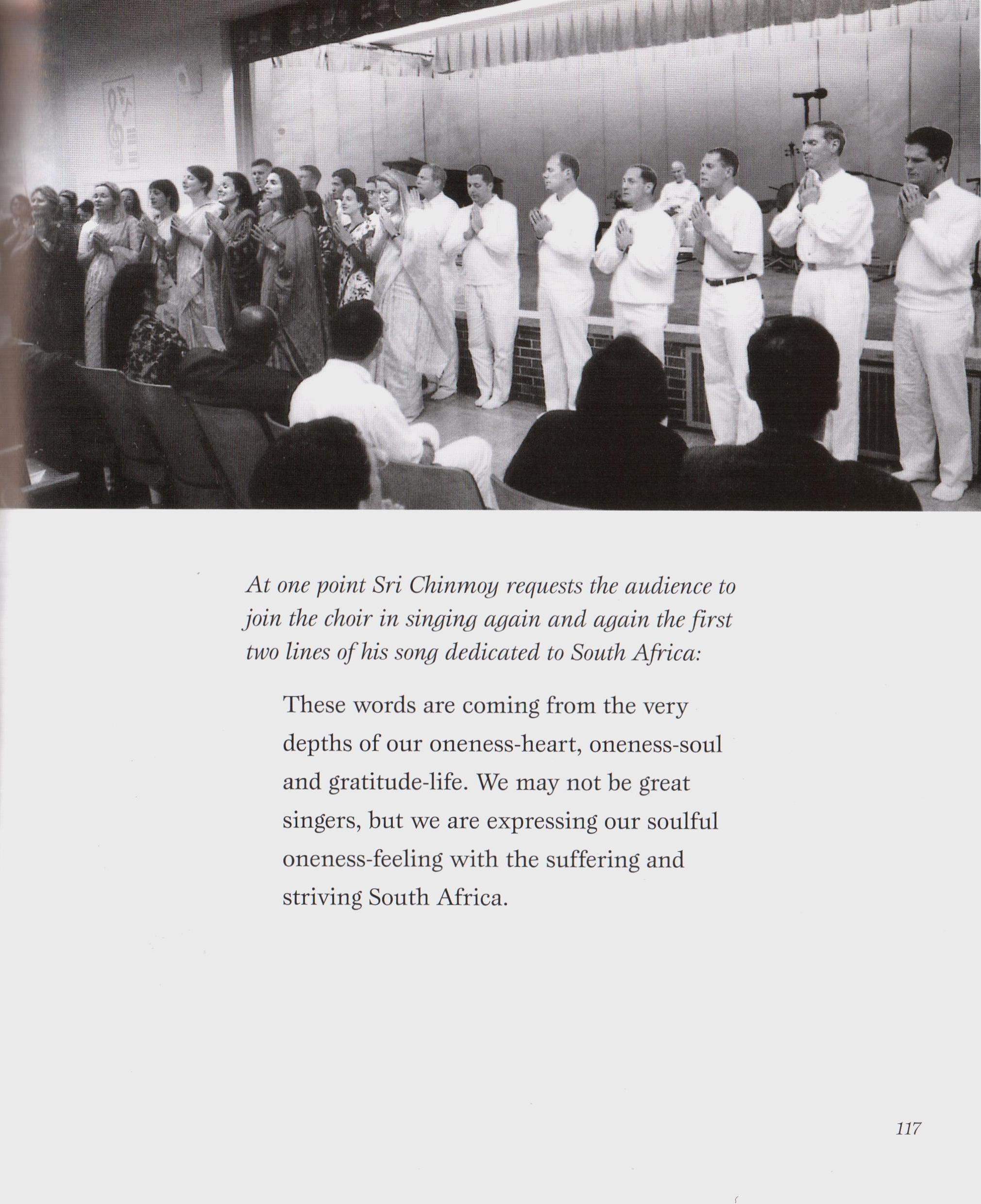 At one point Sri Chinmoy requests the audience to join the choir in singing again and again the first two lines of his song dedicated to South Africa:

These words are coming from the very depths of our oneness-heart, oneness-soul and gratitude-life. We may not be great singers, but we are expressing our soulful oneness-feeling with the suffering and striving South Africa.

Sri Chinmoy reads the soul-stirring message that he gave at Robben Island, South Africa, in 1995, while praying inside the cell where President Mandela had been incarcerated:

Our beloved President Mandela, O supreme Pilot of the South Africa-Boat, it is here in this tinier than the tiniest room that you embodied your country’s streaming tears and bleeding heart.

There was a time when this cave-room played the role of punishment. But now this room plays the role of humanity’s sacred, illumining and fulfilling shrine. 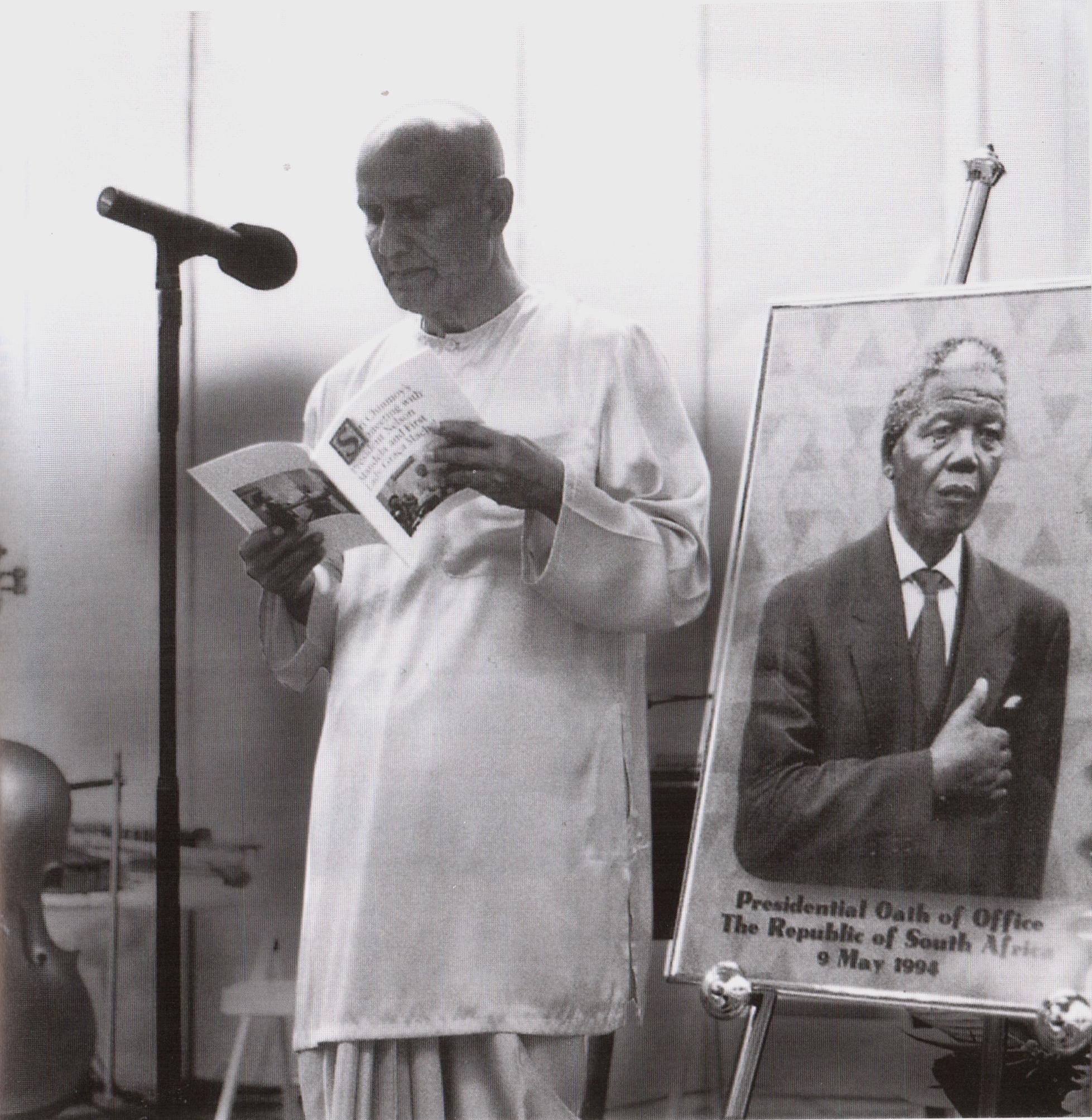 At the end of the programme, Sri Chinmoy lovingly offers Comrade Zuma “The Nelson Mandela Award” with the following remarks: 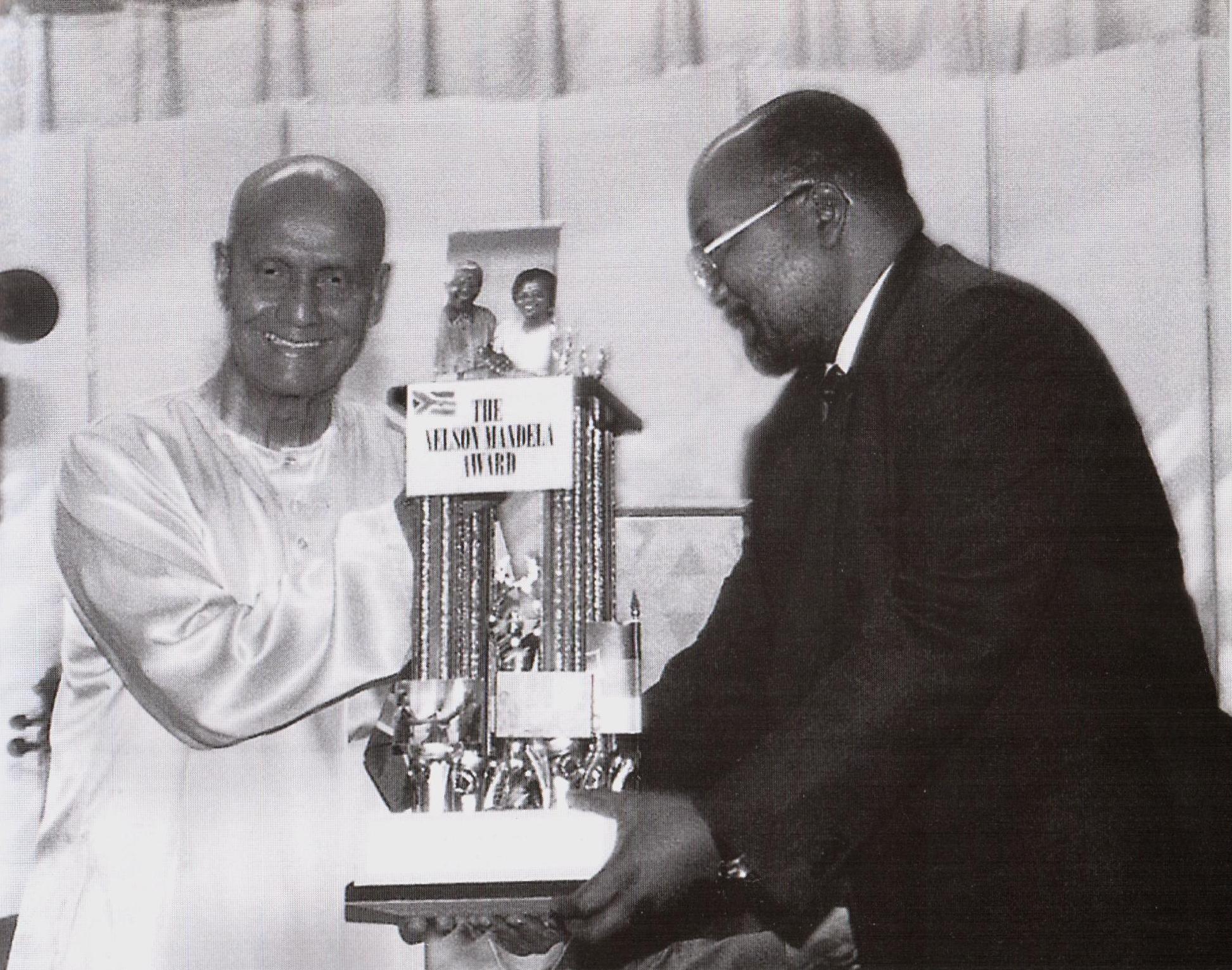 My Brother, our Brother, humanity’s Brother Jacob, Comrade Jacob Zuma, only three days ago you received a most prestigious award, the Nelson Mandela Award, for your most outstanding leadership. Today my students and I are offering you an award with the same name, but it is not in any way as prestigious. Three days ago you received an award as high as the Himalayas. Today’s award is as small as a tiny plant, but it is coming from the very depths of our heart. We claim you as a true brother of our soul, heart and life. Therefore, this Nelson Mandela Award we are offering you on the strength of our oneness-heart. May you live long, long, very long to illumine not only your own countrymen, but also the citizens of the entire world.

This afternoon at the United Nations you gave a supremely inspiring talk about South Africa and President Nelson Mandela. We shall forever treasure your all-illumining mind, all-elevating heart and all-sacrificing life in the inmost recesses of our heart. 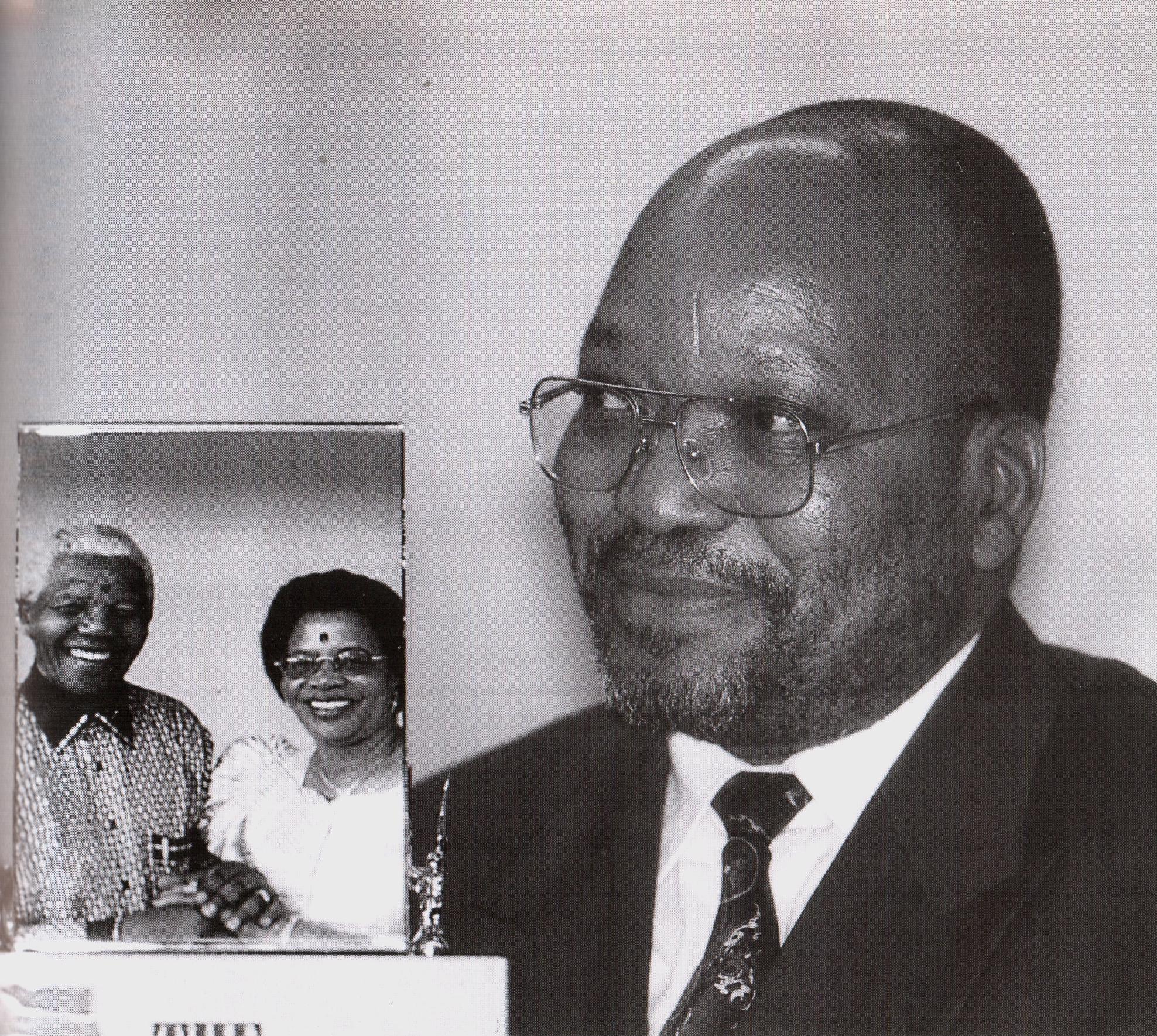 Thank you very much, my Brother Sri Chinmoy and your wonderful students. I feel overwhelmed this evening with what you have done by giving this Peace Concert for our beloved President Nelson Mandela, and also for this award, which I regard as indeed very big. It is the spirit and love with which you honour me that is so profound and so important to the efforts that we are engaged in to bring about peace and stability in the world. Your recognition of our humble contribution in South Africa is a big thing to us.

I want also to humbly thank you for dedicating this Peace Concert to one of our most beloved soldiers of peace, President Nelson Mandela. Many years ago, as you know, at the United Nations, where we were this afternoon, people demonstrated for the release of Mandela from prison. People spoke in support of his struggle. People expressed their sympathies with him when he was in prison.

It was, in the end, the thoughts, the prayers, the efforts that the world put together, and the demand for his release, that finally softened the hearts of those who had said that they would never, never release him. Your prayers were heard, in the end. 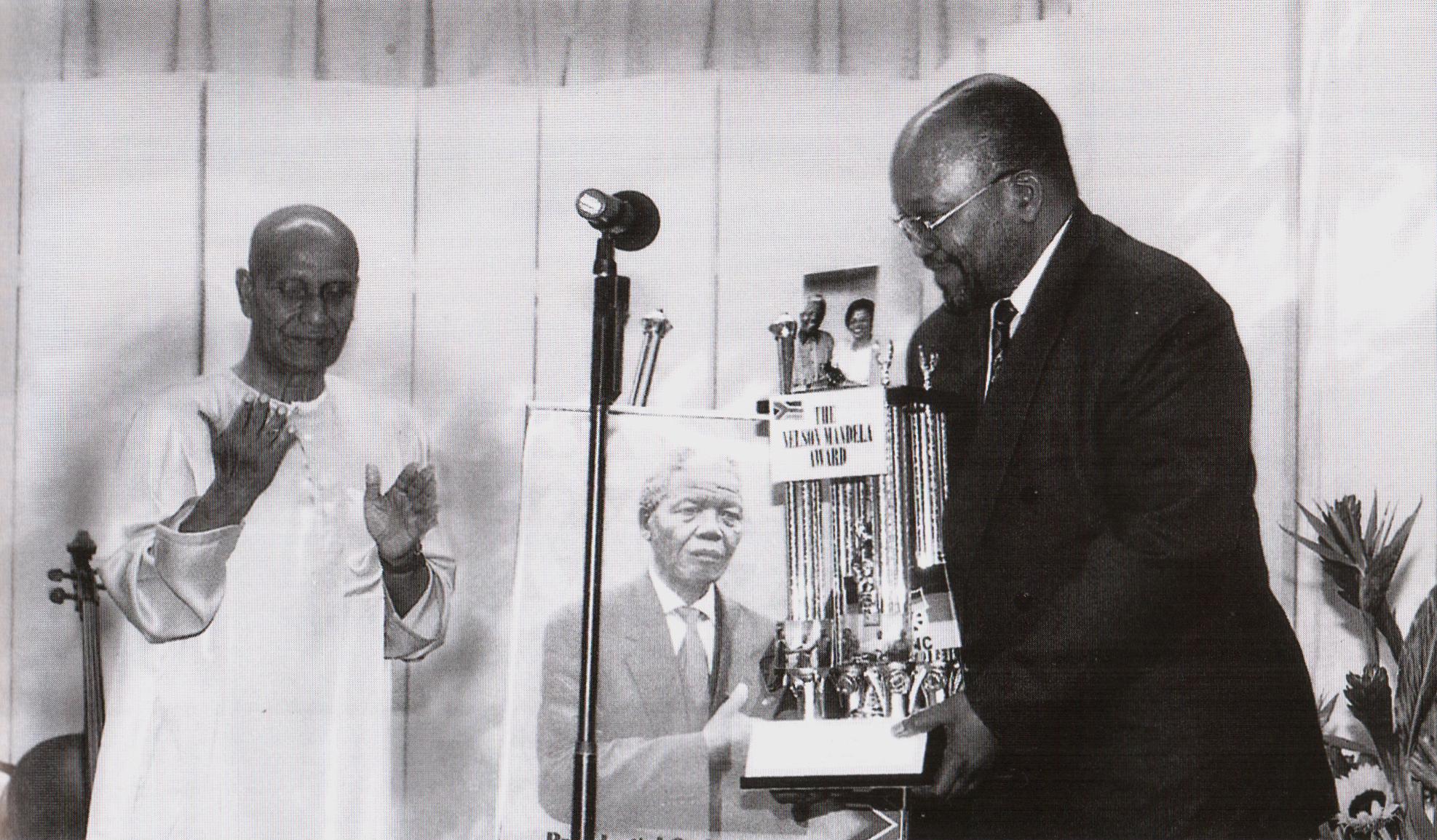 It is most appropriate that today, in this part of the world, we can celebrate his being with us, and recognise the contribution he has made. It is most fitting that you, my Brother, do this in a humble way together with your students, recognising this peace-lover, this man who stands for reconciliation not only in South Africa, but throughout the world. Nelson Mandela is one of the few political leaders who are known and respected by all, totally all. No country in the world does not want to see him. Even big countries recognise his presence, recognise his contribution. He is given a respect that I believe in a sense pays back the 27 years that he was incarcerated in the South African prisons.

You are, therefore, adding to those who acknowledge what he did and what he stands for. He certainly stands for the same principles that you stand for — peace and love for humanity. I thank you very much indeed.

The singers perform a song of congratulations after the presentation.

Sri Chinmoy offers his prayers for President Mandela and gives the final meditation. 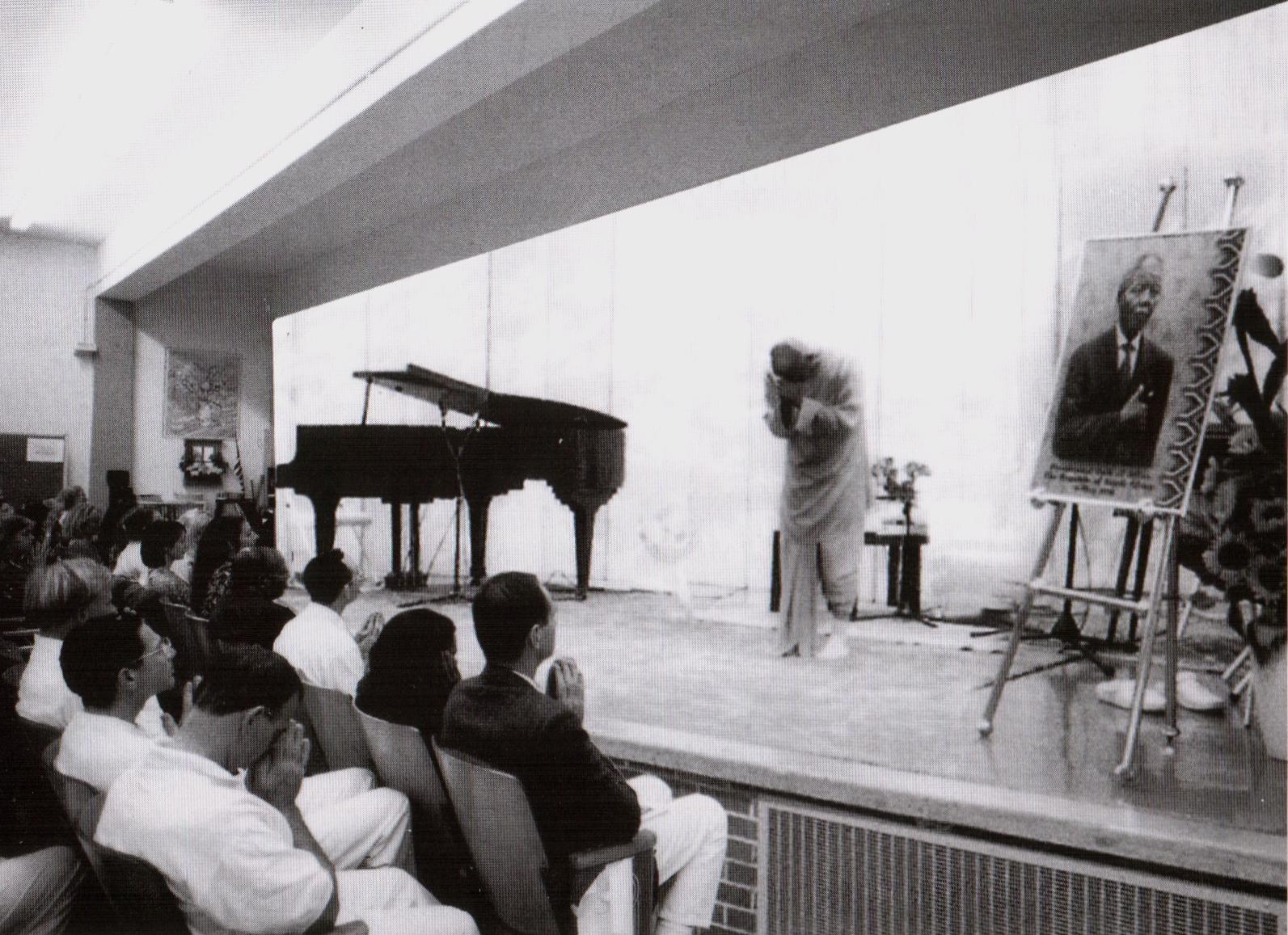