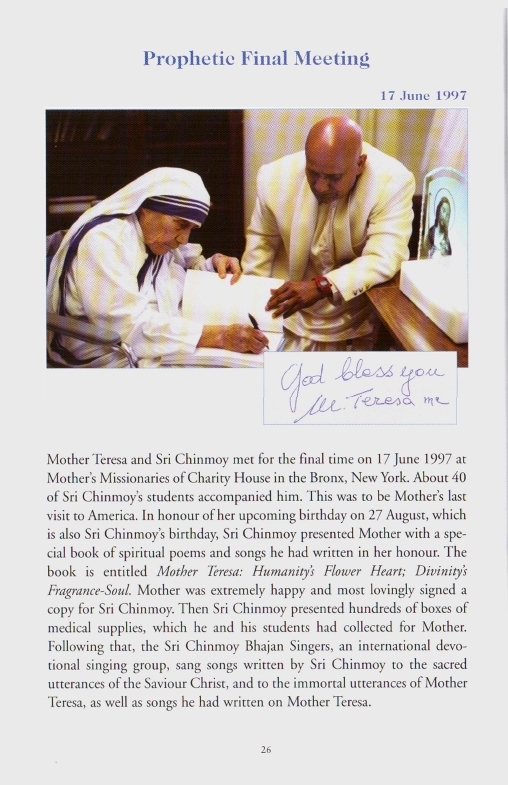 Mother Teresa and Sri Chinmoy met for the final time on 17 June 1997 at Mother’s Missionaries of Charity House in the Bronx, New York. About 40 of Sri Chinmoy’s students accompanied him. This was to be Mother’s last visit to America. In honour of her upcoming birthday on 27 August, which is also Sri Chinmoy’s birthday, Sri Chinmoy presented Mother with a special book of spiritual poems and songs he had written in her honour. The book is entitled Mother Teresa: Humanity’s Flower Heart; Divinity’s Fragrance-Soul. Mother was extremely happy and most lovingly signed a copy for Sri Chinmoy. Then Sri Chinmoy presented hundreds of boxes of medical supplies, which he and his students had collected for Mother. Following that, the Sri Chinmoy Bhajan Singers, an international devotional singing group, sang songs written by Sri Chinmoy to the sacred utterances of the Saviour Christ, and to the immortal utterances of Mother Teresa, as well as songs he had written on Mother Teresa.

[Sri Chinmoy looks on encouragingly as Mother Teresa offers blessings to Ranjana Ghose and the rest of the singers and several devotees.]